We were thrilled to see the article in today’s Intelligencer describing the plans of the new executive director of Fonthill and Mercer Museum, Kyle McKoy.  We plan to reconvene our group and offer to help with the efforts to revive the Little House site.

One immediate way to help is to contribute to the Fonthill Woodlands Project.  From their page:

“The graffiti and spray paint that appears on the exterior and interior of the little house in the woods will be removed and the façade will be cleaned to expose the architectural features of the structure. One of the most unique features on the exterior of the house is a beautiful Mercer tile that depicts a bird and the Latin phrase “Silva Vocat” (the forest calls), and it is this wonderful art that serves as the showpiece for the mission appeal graphics.”

Our representative, Valerie-Anne Lutz, met on August 7 with Mr. Douglas Dolan, Executive Director of the Bucks County Historical Society, to learn more about the Fonthill Trustees’ plans for the Fonthill grounds. At this point, they are in the middle of the project to the restore the Fonthill Gates, and hope that all interested will volunteer to help that project. We will be meeting with a volunteer coordinator to discuss plans to clean up the grounds from the gates to the area of the house in the very near future.  If you’re interested in learning more about this, please comment here or contact valerieanne1222@gmail.com.  More soon…

This beautiful film shows views of the Little Stone House that were never before possible, photographed with a drone above the house:

Thank you so much for this, Tom.  Words cannot express the appreciation from all of your friends who also love the Little Stone House.

Artist Alan Fetterman has generously offered to allow us to use an image of his beautiful painting of the little stone house for our group.  Thank you so much, Alan. 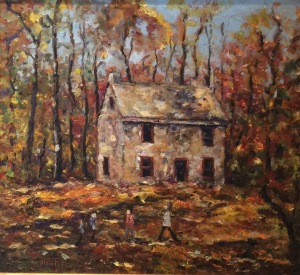 The little stone house is near Fonthill Castle, the home of Henry Chapman Mercer. Originally part of the Bestler tract of land purchased by Mercer in 1907, the house was restored by him in 1916, with the inscription below in Mercer tiles under the roof line.  There is also a charming tile with an image of a bird at top center which reads “Silva Vocat” (“The Forest Calls.”)

In May 1917, the Doylestown Nature Club began using the building for meetings and to store its archives.  After many years, unfortunately, the little house fell into disrepair and has undergone much damage from vandalism and the elements. 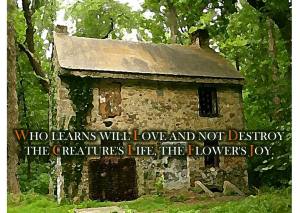 The forest, and the house, are now calling for our assistance.  One evening, several of us began talking in a Facebook group about a little stone house in the woods near Henry Chapman Mercer’s Fonthill Castle in Doylestown, PA.  An article about the history of the house was posted.

That night, we began our group, which grew to over 100 members in just over a week. We’ve been in touch with several people and have offered to help with everything from fundraising to hands-on assistance with cleaning and, we hope, restoration of the little house.  The efforts are, we hope, moving in a positive direction.

We’ve set up this site as a home for the little stone house online.  Welcome! 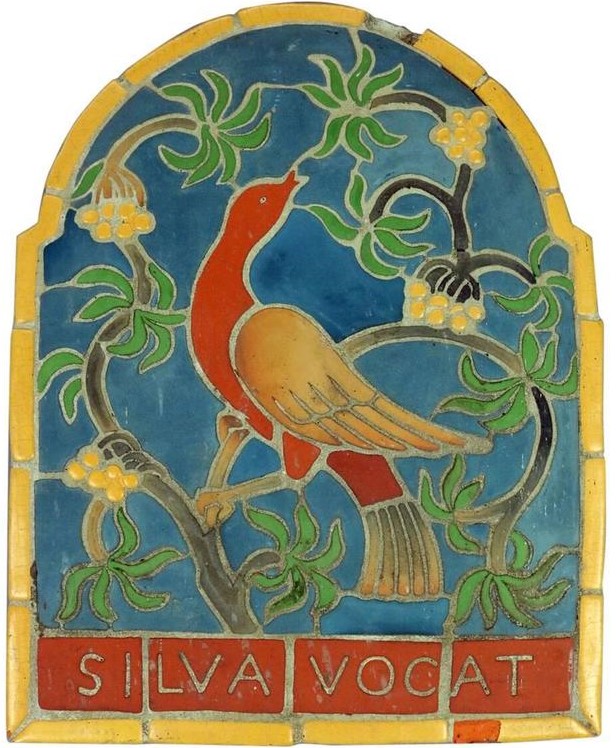